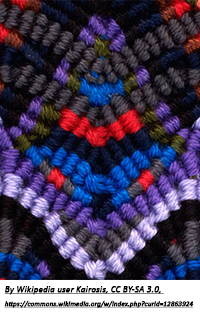 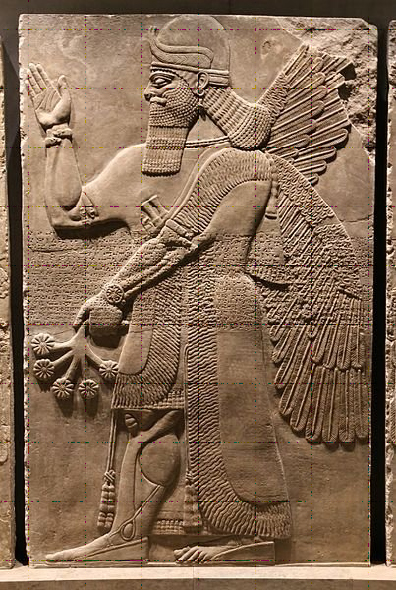 The earliest recorded macramé knots appear in decorative carvings of the Babylonians and Assyrians. Macramé was introduced to Europe via Spain during its conquest by the Moors and the word is believed to derive from a 13th-century Arabic weavers term meaning fringe as the knots were used to turn excess yarn into decorative edges to finish handwoven fabrics.
Probably introduced to England by Queen Mary in the late 17th century it was also practised by sailors who made decorative objects (such as hammocks, belts etc.) whilst at sea thereby disseminating it even further afield when they sold their work in port. It was also known as McNamara’s Lace.
The Victorians loved macramé for “rich trimming” for clothing and household items with a favourite book being “Sylvia’s Book of Macramé Lace” which is still available today.  Macramé regained popularity in the 1970’s for all sorts of furnishing items and accessories including jewellery which incorporated beads and other natural elements such as shell, bone and semi-precious stones.
Cavandoli Macramé is an intricate type of knotting using the half hitch knot to create geometric patterns – also called Tapestry Knotting - this knot is one with which tapestry weavers are already familiar (see right).

Dianne Miles used our warp to make some macramé pieces. The general equipment she used comprised of an S – hook for hanging work whilst in progress; foam square to pin work into; T-pins to hold work in place and for shaping; small brass tipped bobbin to adjust knots and help undo mistakes; beads and findings as required; measure; sharp scissors; needle and thread to help with threading yarn through beads and attachments for findings; PVA adhesive.